World Tour of Music: A Taste of Tango

Tickets are $15 in advance, available at www.ormaco.org or at the following Buehler’s Customer Service Desks: River Styx, Forest Meadow, Wadsworth. Tickets from Buehlers will not be available until October 1st. 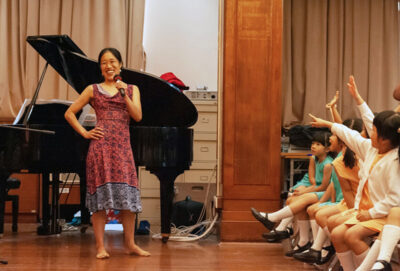 Convinced of tango’s power to include everyone, pianist Winnie Cheung launched Tango with Winnie to bring live tango dance and music to both classic and unconventional tango corners of the world: concert halls, milongas, art galleries, farmers markets, K-12 schools, universities, dementia homes, assisted living spaces, prisons, town-wide multicultural celebrations and more. Tango has deep magic: it reawakens memories of the body and of the mind; it tolerates differences; it shares culture. With veteran artists that Winnie brings from all over the world, especially Argentina, Tango with Winnie handcrafts each program towards any imaginable objective of your event, and invites you sincerely to tango, whoever you are, wherever you are.

Winnie has played over 300 tango events in the USA, Canada, Asia, Argentina, and even Antarctica. Her album with Cuarteto Tanguero, Guapeando, charted Top 10 Billboard World Music in 2018. Her newest album with the duo Ben & Winnie, La Próxima Traición, was released in 2020 with glowing reviews.

Originally from Hong Kong, Winnie is a globetrotting pianist holding a Bachelor’s Degree from the University of Chicago and a Masters and Doctorate from the Eastman School of Music in Piano and Music Composition. She taught classes in music composition, theory, piano, choir, and music appreciation from ages 5 to 95 in Canada and USA until tango found her. Learn more at http://tangowithwinnie.com/. 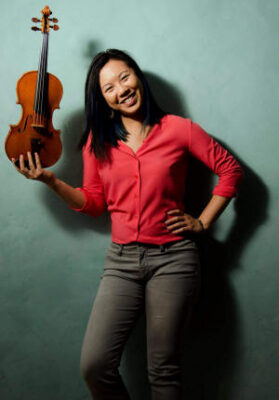 Violinist Janice Lee is known for her compelling performance and interpretation. She has performed as a soloist with the University of Illinois, Raleigh and East Carolina University Symphony Orchestras. Also, Janice has performed in the Illinois Symphony Orchestra, Heartland Festival Orchestra and Millikin-Decatur Symphony Orchestra. As a classically trained violinist, Janice has branched out and explored other genres such as tango and jazz. She performs in the tango orchestras, Bandoneon Massacre (C.U.) and Da Capo Tango (D.C.). At the 2019 Tanguero Workshop in Toronto, Janice performed with Julian Peralta, Winnie Cheung, and Ben Bogart. Past summer engagements included performing in Britten-Pears Orchestra under Marin Alsop, Caroga Lake Chamber Music Festival, Southern Illinois Music Festival, and National Repertory Orchestra.

Janice is a graduate of East Carolina University and the Cleveland Institute of Music. In May 2021, she completed her Doctor of Musical Arts in Violin Performance at the University of Illinois Urbana-Champaign. Always excited to share ideas, her formative teaching experiences began in 2012 through CIM’s outreach program where she worked with students that otherwise wouldn’t have opportunities for private lessons. She taught violin in Millikin University’s Preparatory Department and has guest taught at El Sistema programs in El Salvador and Uruguay. 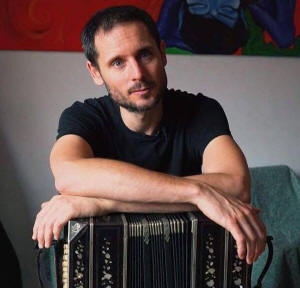 Latin-Grammy-Nominee Hugo Satorre (bandoneón) was born in Buenos Aires in 1977. He began his music education at the Juan José Castro Conservatory in 1993. He studied with the most remarkable bandoneonistas of our times including Walter Rios, Carlos Lazzari and Juan José Mosalini. He has shared the stage with legends of the bandoneon world such as Leopoldo Federico, Emilio Balcarce and Jose Libertela. In 1998 he finished his undergraduate course in Argentine Music at the prestigious Universidad de San Martín. He also obtained a Law Degree from the Universidad de Buenos Aires in 2004.

He studies with the most remarkable bandoneonistas of our times including Walter Rios, Carlos Lazzari and Juan José Mosalini. He has shared the stage with legends of the bandoneon world such as Leopoldo Federico, Emilio Balcarce and Jose Libertela. In 1998 he finished his undergraduate course in Argentine Music at the prestigious Universidad de San Martín. He also obtained a Law Degree from the Universidad de Buenos Aires in 2004.

Hugo has performed in the most prestigious theaters and concert halls throughout the world, such as the Sydney Opera House (Australia), The Esplanade (Singapore), the Walt Disney Hall (Los Angeles, US), Harris Theater (Chicago, US), Dewan Filharmonik Petronas (Malaysia), Teatro Colón (Buenos Aires, Argentina) and the Shanghai Oriental Art Center (Shanghai, China). In March 2012, he was the solo accompanist for Tenor Placido Domingo on stage set up in the widest avenue of the world in Buenos Aires, 9 de Julio Avenue, in front of 120,000 people.

Hugo is a dedicated pedagogue in bandoneon education. He has compiled and written ten books (more to be released soon) free for download for the international bandoneon community in multiple languages on his website http://hugosatorre.com.ar/. He currently teaches bandoneón, tango history and musicality for dancers all over the world.

We will notify you by email when your order is confirmed and add your name to our confirmed order list.

For all confirmed orders, we reserve a seat that you can claim on the day of the event. No paper ticket is required.