Russian Duo: An Evening of Piano and Balalaika

The program is free, but registration is recommended. 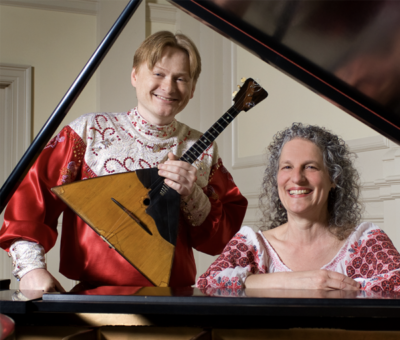 Oleg Kruglyakov was born in Omsk, Siberia, Russia, and began playing the balalaika at age seven. He studied conducting and pedagogy at the renowned Yekaterinburg Conservatory. He is a protégé of Yevgeny Grigorovich Blinov, the foremost balalaika virtuoso of the Soviet Union, who performed the world over and contributed to the balalaika-piano duo repertoire. Oleg taught at the Irkutsk School of Music, Perm College of Music and the Perm Institute of Culture. Since coming to the United States, he has given workshops with Russian Duo as part of their mission to share Russian culture and demonstrate the art of collaboration. To learn more about Oleg, visit http://www.russianduo.com/oleg.html.

Terry Boyarksy is a pianist, movement specialist, singer and ethnomusicologist who believes that every person is musical. Her search for musical collaboration has led her into chamber music, choral singing, folk dance, coaching, accompanying dance and creating ceremony. Terry has collaborated with singers and dancers across the United States, Canada, France, Switzerland and Venezuela. She holds a BA in experimental psychology from Reed College, a BM in Eurythmics from Cleveland Institute of Music and an MA in Ethnomusicology from Kent State University. Terry has taught and created events for institutions such as the Dalcroze Society of America, American Orff-Schulwerk Society, Society for Ethnomusicology, the Cleveland Institute of Music and the Atlanta Symphony Orchestra. To learn more about Terry, visit http://www.russianduo.com/terry.html.