Ohio Regional Music Arts and Cultural Outreach (ORMACO) and the Medina County District Library present An Evening of Irish Music. Join Canton-based Pat Masalko and Bath-based Jamieson Bowman as they bring you a high-energy evening of classic Irish tunes. Be prepared to tap your feet, clap your hands and dance under the stars.

The program is free, but registration is recommended by registering here online. For more information call 419-853-6016. 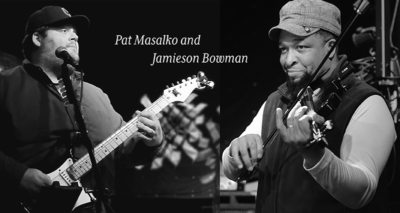 The first think you might notice about Canton-based Pat Masalko’s music is its incredible diversity. The next thing you will notice is that, despite the diversity, a singularity for personality informs all his music. These are marks of musical artistry. His “lyrical songs”- tunes featuring vocals- tend toward folk, pop and rock flavors, while his instrumental compositions embrace cinematic flavors and jam structures. Pat has been involved in many ORMACO outreach programs over the past thirteen years.  Learn more at https://patrickmasalko.com.

Bath-based Jamieson Bowman began playing the violin at the age of two. Although his mother had no formal music training, using the Suzuki Method, Jamieson’s mother helped him quickly learn to play the full repertoire of Suzuki violin music. As a high school junior, he played at Carnegie Hall in New York City and later attended the College of Wooster. Jamieson is a versatile musician who is comfortable playing any style of music. He has played with bands focusing on Irish music, Cajun Zydeco, Big Band, Americana, Rock, Funk and Classical. He is currently the violinist for Elec Simon (Lead Percussionist for the Cleveland Cavaliers and former member of “Stomp” on Broadway). Jamieson has been honored for teaching violin in Chicago where he created the Quality Time Music School. In 2018, he founded Violin Bowman Music Studio, located in Fairlawn. Learn more at https://jeremy-ayers-work.colibriwp.com/the-violin-bowman/.